On the block today, we've got third party custom transformer from a company called Perfect Effect. It has the very generic name "Shadow Warrior" although it's clearly supposed to be a homage/new version of the Generation 1 Decepticon cassette Rumble: 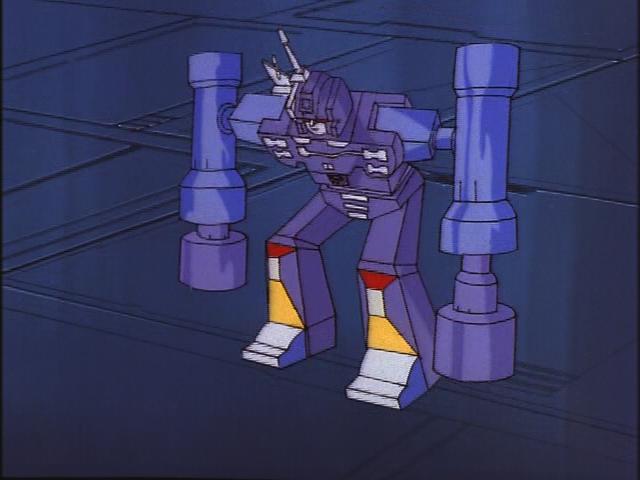 Although the colors have been changed to match the Nemesis Prime/Shadow Commander color scheme. Instead of transforming into a cassette, it transforms into a dual Gatling gun, which can be held by a good chunk of transformers, or mounted on the shoulders of the Shadow Commander armor. In the latter use, it's intended to be used in pairs.

Take a look at the pics, and I'll have more to say at the end.

So, he's a surprisingly poseable little due. The sidearm in the last picture can be clipped to his leg to "holster" it, and it's used as the handle for when he's a hand wielded weapon, sadly there's no place to put it when he's shoulder mounted. The back cannons can be hand held as well obviously, and are stored inside the pile drivers while in weapon mode.

All in all, another great third part transformer, and great upgrade for Shadow Commander.

I'm kind of torn on the colors, on the one hand it would have been cool to have them in the classic colors for Rumble and Frenzy (identical to Rumble, except he's a different color) which are red and blue (precisely who's which color is a matter for debate thanks to discrepancies between the toys and cartoon), but that wouldn't have looked nearly as nice on Shadow Commander.