Better Off Ted: The High Road Leads To Pansytown 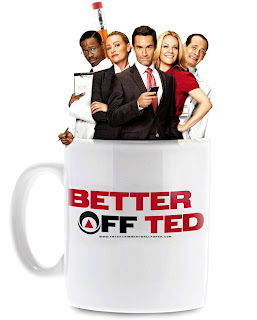 Based on a review I read the other day, I decided to check out Better Off Ted. If you want the quick and dirty review, it's this: Why hasn't anyone I know told me about this show? It's funny, nerdy, well acted and has a ridiculous amount of just out there mad science moments. You'd think that everyone I know would be raving about this show, but they aren't.
So, Ted is the manager of the R&D department for an evil corporation called Veridian Dynamic. Ted's good at his job, and just about everyone likes him, he's a single dad, and he always tries to do the right thing. You'd think that Ted would be an unbearbly perfect character, and he is a little disgusting at times, but he has just enough flaws to make him interesting, he's overly competitive, a stickler for rules, and has somehow created a rule to keep him from hooking up with the hot product tester that he knows is a perfect match for him. He also has a nasty habit of breaking the fourth wall and talking to the camera, which is a fun way for you to hear what he's thinking, without the cliched looking up while deep in thought during a voiceover.
In our opening episode, Ted's team is put in charge of weaponizing pumpkins for a country that has a surplus of pumpkins, and a deficit of armaments, "We can do that". In the same episode, Ted's given a piece of frabic that the company can manufacture for cheap, and told to find a use for it. He immediately decides to create an office chair, which turns out to be terribly uncomfortable, but manages to boost the productivity of employees sitting in it. Mad science is never really the point of the show, however, it's always about social situations, as well as the evil corporate overlords' schemes to make the workplace more productive. One episode had the company posting a list of suggested oprions for dating within the company, based upon genetic compatibility. Another had a typo in a memo cause foul language to be used in all conversations during work hours.
The bottom line is that Better Off Ted does a decent job of filling the whole in my life that was left by Pushing Daisies being cancelled. It doesn't have the vibrant colors, or whimsical fairy tale elements, but it does have wicked sense of humor with some snappy dialogue.