Life Lessons I Should Probably Learn From Movies: Fearless

September 28, 2018
In case you've just met me, I was perhaps raised a bit too much on movies. Part of it was certainly my mom's passion for watching movies, and it was something we could do together. I also lived pretty far from my school, so I didn't have any friends who lived close by. The cherry on top might be that my mom worked nights for a large part of my childhood, so I spent a lot of time at home.

We didn't have cable, and I spent a long time in between functional videogame systems. I remember swapping between three different 8 bit Nintendo consoles, hoping to find the one that would actually work and let me play Zelda or Duck Hunt. What we did have was a LOT of VHS tapes. Some purchased, some recorded off of broadcasts, or from someone's house that had cable, and ones that were pirated by daisy chaining VCRs together. I should mention that I also had a pretty abysmal attendance rate at school, and there's a lot of weird stuff that used to be played during daytime television.

So, yeah, if you ever wondered about the nurture aspect of my origins, aside from my absolutely lovely mother, that's the brunt of it.

This was a particularly long winded introduction to the fact that I woke up this morning replaying a scene in my head from the 1993 movie Fearless. I remember at the time it seemed like a really big deal, but it's definitely not been remembered as a particularly influential movie. 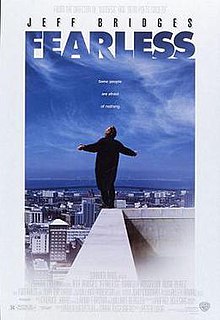 I think you should probably watch it, especially if you're trying to process any kind of grief or trauma. Which is rich, because I don't think I've watched it during my entire adult life, and I certainly suffer from enough of those.

So, the basic story: Jeff Bridges plays a man who was on a passenger flight when it crashed, and walked away without a scratch. He helps a couple of people after the crash, and then when the EMTs show up, he says he wasn't on the plane and walks away. Most of the movie follows his wanderings and interaction with his old life, with his radically different mental state.

The scene in particular, comes when he meets up with another survivor of the crash, played by Rosie Perez. She had an infant on the flight, and when the plane started to go down, she couldn't get the seatbuckle to clasp, and the stewardess tells her to buckle herself in and hold onto her child. Spoiler, the kid doesn't make it.

Of course, she feels guilt about this, she should have been able to hold on, she's a mother, it's her whole meaning in life to be strong when her child's life is on the line. Bridges' character tries to reassure her that she did everything she could, but she just can't hear it.

This is the scene, that's stuck with me for 25 years, and I woke up this morning replaying it over and over again: In the middle of her having a breakdown, he buckles her into the backseat of his car, pulls a toolbox out of the trunk, puts it in her arms and says "this is your baby, you have to save it, don't you dare let go!" he then gets in the drivers seat, and accelerates the length of a parking lot and rams the car into a concrete wall. The toolbox slips out of her arms and sails through the windshield, smashing against the wall. Then he tells her, this was at 25 miles per hour, how much faster was the plane travelling when it suddenly hit the ground? There is no possible way that anyone could have held on in those conditions.

As much as I like to say that I'm happy with the person that I am, I still spend a lot of time thinking about the events of my past. I should have seen that coming. Of course that person would react that way. Why wasn't I smarter, stronger, paying more attention to this other thing that was going on? I assume that I do this about the same amount as most other people. I wish there was a car crash test that we could perform for this more ephemeral doubts. It's easy to get bogged down in thinking about how I could have done something differently and made out better, instead of realizing that I did the best I could, and that I should just try and be aware of similar situations in the future, but ultimately, you can't be ready for anything, no matter what they say in the movies.