Contrasts Between Power Rangers and Transformers

September 07, 2018
As should not be a surprise to anyone reading this, I love transforming robot toys. My first love was Transformers, of course. The line went on a long hiatus, at about the age that I could start doing random chores for my family to make some extra money. There was a remarkable dearth of transforming robots to be found on toy aisles until the Power Rangers showed up.

Power Rangers was too silly of a show for 6th grade Bryce to admit watching and liking, but I did enjoy the designs for the robots that they piloted, which then transformed and/or combined. I've recently been reading a lot about how the show gets made, and it's fascinatingly bizarre. I want to avoid getting side tracked by the show, since I'm trying to talk about the toys, but the weird thing about the show is that they take a Japanese show, and basically cut, edit, and splice in original footage, such that really, they've made an entirely different story, and just used stock footage for all of the action scenes.

Okay, no sidetracking. Back to the toys. First off, looking at Power Rangers, and then at Transformers, it becomes obvious that they have two very different philosophies on what their fans want. Now, obviously, with Power Rangers, you don't just have toys for the transforming robots, but you've got toys for the Rangers themselves, with lots of different varieties, battle damage, special armor, etc. The thing you'll notice, though, is that there aren't many toys available that represent the bad guys. If you actually watch any of the shows, you'll notice that there's a handful of villains that pretty much stand around talking, and rarely actually directly fight the heroes. Instead there's a monster of the week that's built, and completely destroyed at the end of the episode. I'm guessing that it didn't end being profitable to try and sell kids that one monster that they saw for five minutes and then it exploded.

Back to the transforming robots. Generally only the good guys have transforming robots, so the hook to keep you buying stuff is that there are extra power up pieces that are introduced later on. It's another giant robot, but it turns into a gun, a hammer, or it combines with the original robot in some special way that makes it "more powerful". So the broad stroke strategy is that instead of giving you lots of different transforming robots that all fight together, a la Transformers, you have one big robot, that gets helped out by lots of smaller robots to fight enemies in your imagination, or your cats.

Okay, details! Since Power Rangers robots are all about combining to make a big robot, the "Megazord" let's compare them to Transformers combiners.

First up, you have the original Transformers combiner, Devastator. Devastator is made up of six construction vehicles, and when he showed up, you knew the Autobots were in trouble. 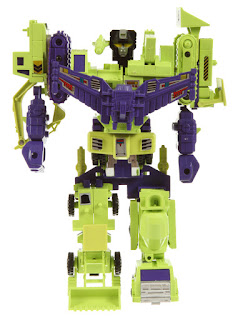 That toy, there, was the dream when I was a kid. Now, he was the first, but of course, combining became a big part of the Transformers and several more were introduced, the majority of which used a common connection to combine. 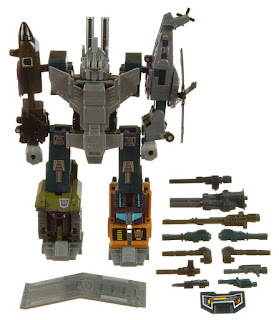 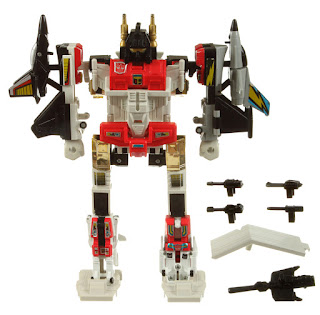 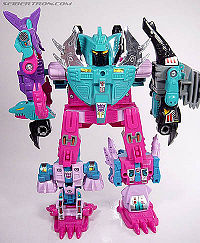 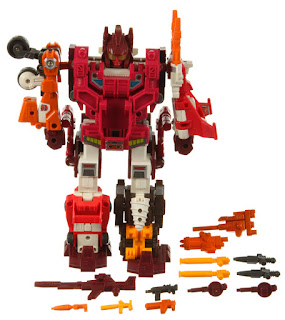 There are a handful more of the combiners that were all designed using the same universal connector, but the gist is that you can pull an arm off of any of those guys, and use it as an arm or a leg on any of the other guys. So, lots of kids that I knew that were lucky enough to have any of these guys inevitably ended up with a Frankenstein's monster of bits, because we invariably lost some of them and just swapped someone else in to make sure we at least ended up with a big robot. The weird thing is that this compatibility was never used in the fiction. A very few times they were depicted being able to swap an arm for a leg on the same combiner, but each team was very much only compatible within their team.

Now, Power Rangers. This is the first "Megazord": 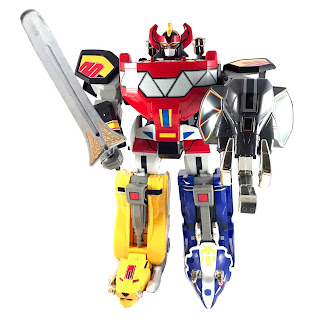 It's formed by combining 5 robot versions of prehistoric beasts. The first upgrade that the Megazord got was the Dragonzord. 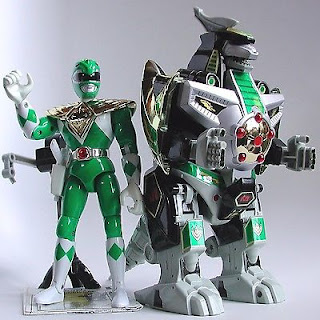 The Dragonzord can combine with the Megazord in two ways. First is that it can completely replace the T-rex and Pterodactyl. Just using the arms and legs: 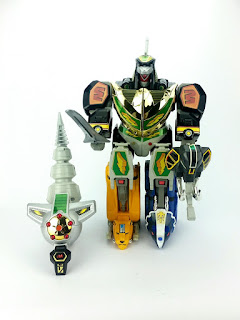 Alternatively, it can make a kind of mantle that drapes over the top of the megazord: 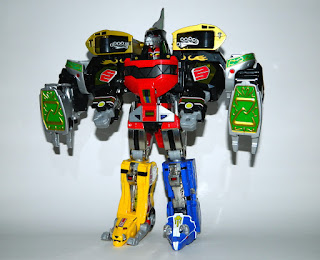 There's another step of conversion, where it gets another dinosaur that it can ride: 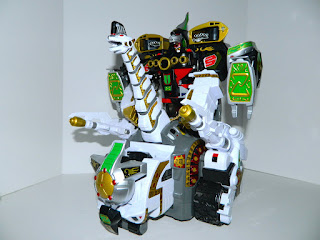 I dunno, this sounded a lot more profound before I actually started writing this. Have some videos that show what I'm talking about

This particular Megazord has a bunch of alternate arms that it could be using.

Conversely, this Megazord has compartments in all of it's limbs and torso that you can slow various components into that will then pop out on a spring.

Oh well, thanks for indulging me. To make it slightly more worthwhile, I'm going to include my favorite Power Rangers meme: 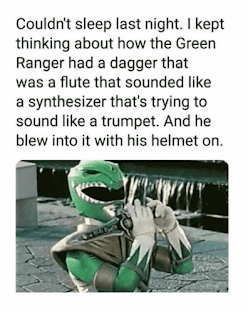