Stargate: Universe - Why is Lieutenant Scott On the Show?

October 27, 2010
I feel like I've spent more time talking about SG:U than any other show on this blog, is that because I love it or hate it? I'm loving it, it's the closest any recent show has come to making me feel like I felt as a kid, watching Star Trek:TNG. That being said, last nights episode just bored the hell out of me. 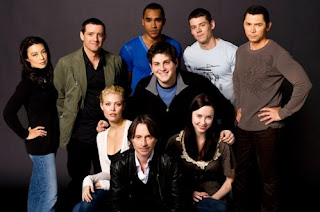 Spot the weakest link
The picture shows the core cast members. From the left going clockwise:

Camille Ray - She's a civilian administrator, the survivors aboard the Destiny are a mix of military and civilian personnel. She's responsible for the civilians, and butts heads with the military leadership frequently when they make decisions without considering basic human rights.

Colonel Everett Young - He's the ranking military officer, with all that entails, he makes the hard decisions, and then has to live with them. He's also not afraid to get his hands dirty.

Greer - I think he's a Sergeant, but don't quote me on that, he's actually the third man down the rung of command, he's extremely devoted to his superiors, but has a very short fuse. Always gets his hands dirty

Colonel Telford - Spent the first season as a brainwashed double operative, the conditioning has now been broken, and he's aboard the Destiny. For the most part he seems to be functioning in an advisory capacity, occasionally he confronts Young when he feels that he's not following the orders of the home command.

Chloe - She's the daughter of a senator, just in the wrong place at the wrong time. At one point she was kidnapped by an alien race, and there's been a recent development where she's been "infected" by them, which gives her astounding recuperative powers, but also a split personality that seems to be gathering intel for the aliens.

Dr Rush - He's the man with all the answers. He's conniving, condescending, and generally only cares about the Destiny, not so much about the crew. Although that's starting to change a bit, He and Young had a knock down drag out fight in the first season, and ever since then, they've kind of reconciled their differences.

TJ - A military medic, she's the closest thing to a doctor that they've got, she had an affair with Young in the past, and was carrying his child until it died after she got shot.

Eli - He's the stereotypical computer nerd, he got involved with the Stargate program, after solving a problem that had been coded into a videogame, as a way of getting more people invovled with cracking it, while maintaing secrecy.

I'm sure you can guess, based on the depth that I went into with all of the characters, why I'm so down on Scott. He hasn't done anything. His defining characteristic seems to be that he's diddling Chloe, and there's some sexual tension leftover, because he was diddling someone else before they ended up on the Destiny. Every time he's been put in command, he's wimped out, every time action occurs, he's somewhere else, doing something "crucial" but not interesting.

And yet, the show seems to want us to think of him as the hero character, he gets the girl, he has Young's complete trust, when someone needs to learn how to fly the shuttle craft, he's picked. But he never really seems to do anything, except get injured. I read an article on IO9.com which basically talked about how every hero needs a "Fuck Yeah!" moment. That turning point where you realize, yes, they've got reserves that have been untapped until now, that deep down, no matter what they are on the surface, they're made of steel.

Everyone I listed up there, has had that moment, with the exception of Scott. Not all of involved feats of physical prowess, in fact most didn't. Eli, carried a wounded Chloe who was bleeding out, through endless corridors when their air was running out, even when he could hardly go any further, he refused to leave her behind. There's nothing superhuman about that, just pure willpower.

Scott hasn't shown that, in this last episode, he was envenomed by some exotic plant, which caused his arm to swell up with blue growths. I think it's a sign that there's something seriously lacking in the character, when you find yourself wishing that he'll either just die, or at least have his arm amputated.