The Deep: Submersible Drama For the New Millenium 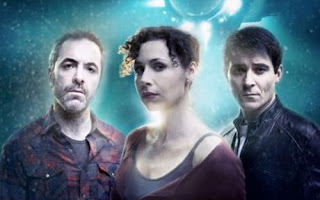 Really, right off the bat, The Deep has nothing in common with Seaquest other than they're both underwater adventures.

The Deep kicks off with some kind of research submarine losing power, with one lone research out in a mini-sub, also losing power and sinking to the depths.

Once into the show proper, we're introduced to a new submarine crew, in a new sub built from the same plans as the first one, setting out to complete the research that the first failed, and possibly bring back news of what happened to them. The original mission was to investigate thermal vents found under the North Pole, which is home to all kinds of undiscovered life forms.

It's really difficult to talk anymore about the plot, because there are twists and turns starting from the very first episode. There's a lot of tension, the special effects are wonderful, the characters are written well, and acted better. James Nesbitt (Jekyll, watch it now if you haven't) is phenomenal as the engineer/haunted husband of the lone researcher from the intro. Minnie Driver is the captain and designer of the submarine. The rest of the cast are a number of people whose names I don't know, and for the most part never saw before.

My only complaint about the show just stems from my personal prejudice, I don't like unhappy endings. While this doesn't rank very high on the depresso-meter, there are a couple of characters that I was really rooting for, who just didn't make it past the writer's scythe. I recommend giving it a shot, it's only 5 episodes long, just remember that no one is safe.

The BBC standard for season length seems to be 6 episodes, with more popular shows like Doctor Who running 12 eps with a Christmas special. In contrast to the US and Japan where the standard is 12 episodes, with some going up to 24.

I've had a number of conversations with my friend about this, but it just seems that the BBC does more with less. I don't know that on a whole, BBC programming is that much better than US programming, but I think that with such a short constraint, they have to know where they're going, and get there fast. There's none of the slow buildup, or shows changing gears halfway through, because if they did that, they'd only have 3 episodes left to finish it off. So, you pretty much know in the first episode what the tone and direction of the rest of the show is going to be. None of the mis-steps like Dollhouse that took 5 episodes to really figure out where it was going, and then another 12 episodes to deliver on that promise.

The other thing in the favor of the shorter format, is that there's much risk of the show dragging on and losing it's momentum. Nothing that just keeps going and going, like the fourth season of Battlestar.