I am, quite obviously, a massive fan of Transformers, but I grew up in kind of a weird time for being a fan. Really, I'm just a LITTLE too young. I remember seeing my brother, who was six years older than I, get all of the coolest Transformers, and then by the time that I started being able to ask for Transformers for myself, the nature of Transformers had greatly changed. I have a great anecdotal story about him clipping Soundwave (arguably one of the coolest Transformers toys ever, which turned into a microcassette player) to his shorts and climbing a tree. He then proceeded to fall 30 feet out of that tree, and land on Soundwave, which poked him right in the kidney, and he peed blood for a week.

I have so much fondness for the original Transformers, because much of my memory of them was either watching my brother play with his, or looking at the toy catalogs that came with them and trying to imagine, based off the pictures, how they transformed, and what they'd feel like. They were kind of a forbidden fruit, always out of reach. One of the few exceptions to this rule is Astrotrain: 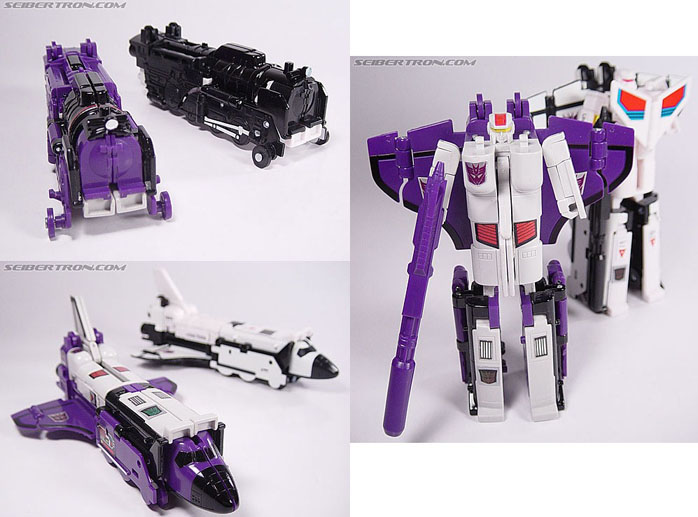 He's very inventively named, you see, he transforms into a space shuttle AND a coal powered train. I've been thinking about him quite a bit lately, because he is one of my favorites, but I think it's purely out of nostalgia. He was the Transformer that I got for Christmas, TWICE, because I broke the first one. In hindsight, looking at him, he is a VERY simple toy, compared to other Transformers of his age, so I think it was just a fairly sure thing that four year old Bryce could reasonably learn to transform on his own, and hopefully wouldn't horribly break it. I did manage to transform him wrong, get his arm stuck, and snap off a fist whilst trying to pry it back apart. Hence getting a second one, which I have a very clear memory of asking a mall Santa for it the second time.
The funny thing, is that Astrotrain isn't a terribly important character he's part of a group of six (three Autobot, three Decepticon) "triplechangers". I never got to watch the actual cartoon much, because it wasn't really on the air by the time I got to choose what I was watching. I did however watch the animated movie from 1986 over and over. Astrotrain DOES actually have a somewhat crucial role in it, even if he doesn't have many lines. In the movie, after Megatron and Optimus Prime have their big showdown where Prime is killed and Megatron is mortally wounded. Megatron and the rest of the Decepticons make their escape INSIDE Astrotrain. Apparently his space shuttle mode can be large enough to carry a dozen or more Transformers, which always broke Little Bryce's mind. But it reinforces that he's a toy that I actually had, in a thing I could actually watch.
In further hindsight, Astrotrain is ridiculous. A general theme with the triplechangers is that they can turn into a robot, some kind of terrestrial vehicle, and then an air vehicle. One can argue the utility of having a robot that transforms into a vehicle, which generally seems to have less mobility and adaptability, but we're talking Transformers here, that's just something you have to hang with. So the rest of the triplechangers generally turn into some kind of car, and then a jet or a helicopter (Broadside being a strong stand out in that he transforms into a fighter jet, AND an aircraft carrier). Blitzwing has always been a favorite of mine, he transforms from a tank into a fighter jet, and he's honestly a way better toy. Compared to all of them, Astrotrain turns into a coal powered locomotive, which should really only be able to drive where the train tracks go, and a space shuttle which shouldn't be able to take off, except by being strapped to a massive rocket, and doesn't so much fly, as fall slowly. He should be the LEAST functional of all of the triplechangers. You can make the argument that the real purpose of the vehicle mode for a Transformer is disguise, rather than utility, I mean it's right in the title "Transformers: Robots In Disguise".... So we've got a magic alien robot, that can disguise itself to merely LOOK like an old train, or a space shuttle. The capabilities of said disguise modes might greatly exceed those of what he's TRYING to look like. That being said, how effective a disguise is it to see a coal train going crosscountry where there are no train tracks, or a space shuttle that's just flying over a city?
In closing, Astrotrain is stupid, and I love him