The Human Psyche is a Weird Place

I don't think there's anyone out there reading this blog that doesn't know me personally, but if there is, here's the context: I lost one of my cats recently. Not just ONE of my three cats, but THE cat. I had him for eight or so years, and he was as much a part of me as anything.

Obviously, I'm sad, I'm depressed, I don't want to do things with my friends, and it takes a lot more effort to get out of bed and go to work in the morning. This is all expected, and natural. Some part of me still insists that I'm somehow weak because it's still so heavily affecting me, and it's almost been a whole week! Of course, this is the irrational asshole in my consciousness, if I could get them to shut up instantly with pure logic, I'd be a much different person. So I have to work through, and argue that bastard back.

I'm so used to that process, that it doesn't seem weird anymore, here's the thing that I found weird. I'm gonna say... fifteen years ago, I worked at a Sears repair center. I started working there at the center's formation, before that, they had repair centers at each individual Sears store, so I was a rookie, but most of the technicians were all people that had been working at Sears for years in the individual stores. At some point, there was put up a memorial for someone that had killed himself, he didn't work there, but his brother did, and I think he used to work at one of the old stores, so a lot of people knew him. I asked someone about him, and they said that he'd gotten some kind of physical disability or something, which is why he didn't work for Sears anymore, and he had two golden retrievers. He lost both of them within a relatively short time, and then he killed himself.

Like I said, that's been fifteen years, I don't know why I would suddenly remember that now, I worked at veterinarian's office for something like 4 years, I can think of any number of stories of losing pets that I am much intimately aware of. In case of any of you are worried, it's not because I'm having suicidal thoughts. So why do I keep thinking of it? I have come up with a theory, and that is that I may have an irrational asshole in my consciousness, but I've also got an irrational therapist, or Samaritan. I think it's that irrational half of my brain telling me that it's okay to be depressed. Just because some people aren't as attached to a pet, or they don't feel their grief in the same way, it doesn't mean I'm weak. I've just got some shit to work through. 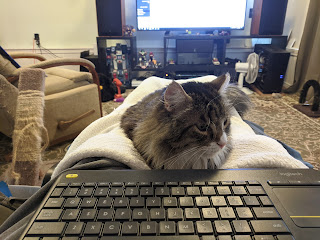 I miss you Charlie