Wolfbreed by S Andrew Swann: AKA Elfen Lied The Novelization 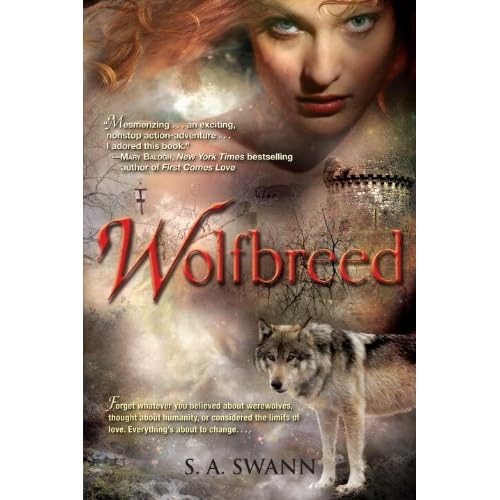 I'm probably going to sound pretty harsh in my opinion about this book, but really, it was a very entertaining read, and I've not had a book for a long time that sucked me in like this one did, I literally spent every free moment turning it's pages until I was done, rather than watch TV, play video games, or read comics.

So, there you are, the one paragraph review. Here's a bit of a synopsis though, the story revolves around a female werewolf who has been captured by a sect of knights of the teutonic order during the time of the crusades, and been raised into their service as a weapon to defeat the pagan tribes of Prussia in order to bring them to the light Christianity (part of what makes this story so compelling is that I can readily believe that that would happen). The story kicks off with the werewolf, Lilly, escaping from the order when their leader is called away, and she's left in the care of a relatively inexperienced/uninformed group of knights. She breaks free, but not before taking a silver tipped crossbow bolt to the head, which grazes her skull, shortly thereafter she passes out in a stream, and reverts to human form, where she's found by a local boy. It's further revealed that either do to physical or emotional trauma, she's developed a split personality, one is innocent, emotionally and intellectually immature, barely even able to speak, and the other is the cold, rational killing machine created by the order.

So, let's stop right there. At this point, the story was sounding pretty damn familiar, and it took me a little bit to make the connection. It's the anime/manga Elfen Lied! Just say she's a werewolf, and you're good.

Really, the opening of Elfen Lied is pretty much the same synopsis, just replace Prussia with modern Japan, werewolf with girl with telekinetic abilities, and silver tipped crossbow bolt with sniper round. They've even both got red hair! The only real difference is that in Elfen Lied the telekinetics are not being used as weapon, but just studied. The parallels don't stop there, but I don't want to go any further, for fear of ruining either story.

At first I just thought it was a coincidence, I mean, there are only so many stories, you're bound to come across a few that are more than a little similar. Until I looked through the acknowledgements (I admit, I typically skim over that section of a book) only to see that Swann calls out Elfen Lied saying it "heavily influenced" the creation of this novel.

I wouldn't go so far as to say that Wolfbreed is a ripoff of Elfen Lied, it's more of a homage, Swann's managed to take a lot of the premise and character of the anime, and put it in a different world and setting, and instead manged to tell an interesting tale of someone that many would label a monster, coming to terms with faith, redemption and acceptance.

Now I'm wanting to track down the Manga form of Elfen Lied to give it a read, since I've only seen the anime.